It is a testament to the growing stature of HLTH in the world of healthcare conferences and industry networking that when a panelist made a patently false declaration on LinkedIn about an upcoming panel discussion people took notice enough to contact a news organization to correct the record.

For the third successive year, HLTH is busy conducting its agenda-setting conference, this year virtually with a mixture of live and pre-recorded content to reflect the transformation underway and the transformation needed in healthcare. Earlier today, it made a pre-recorded session available focused on the 10 years of history at CMMI (Center for Medicare and Medicaid Innovation) but one top former CMMI official was conspicuous by his absence.

The Center for Medicare and Medicaid Innovation was established in 2010 during the Obama administration to find answers to the thorniest problems plaguing healthcare: how to bend the ever-increasing cost curve with innovative payment models and provide better care delivery models too.

Its first director was Rick Gilfillan, who led the agency until his departure in 2013. That fact is undisputed. And in fact, even before being formally named director, his acting director position was so consequential that Modern Healthcare ranked him no. 1 in its 2011 list of 50 Most Influential Physicians.

But seven years after his departure from CMMI, a successor appears to be engaging in a bit of revisionist history aided by the platform provided by a respected healthcare conference. Last week, Patrick Conway, who took over as director of CMMI following Gilfillan’s departure, shared the following post on his personal Linkedin account about his participation in an upcoming HLTH panel entitled: CMMI’s 10 Year History and the Path Forward for Value-Based Care. (Click picture to enlarge.) 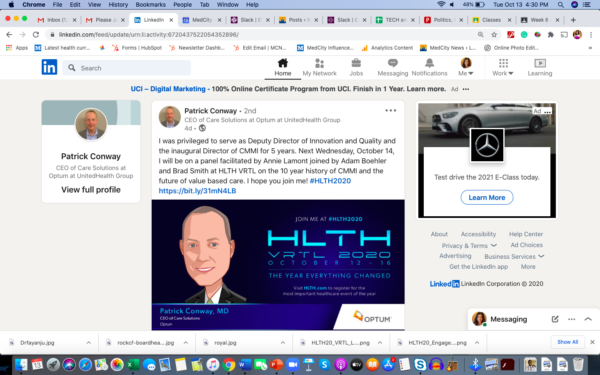 Former CMMI staffers who worked with both Conway and Gilfillan were incensed at the description “inaugural director.” All spoke on the condition they not be identified.

“To call himself the ‘inaugural director’ is a bald-faced lie,” said one senior healthcare executive. “[Conway] almost never cites the director before him. This is whitewashing of history.”

Another member of Gilfillan’s team from the early 2010 time frame echoed a similar sentiment.

“You can’t make up your own facts — so we see that happening in the world today, but it’s a misrepresentation of CMMI’s history,” this person stated.

A third person noted that it’s never been in doubt who led CMMI back in the early days of the center being established.

“It was very clear that the two decision-makers were Rick (Gilfillan) and Don (Berwick, the CMS administrator at the time).” this source said.

When reached by text late Tuesday, Conway noted that he had thanked Gilfillan and other CMMI staffers on Twitter and that he also thanked Gilfillan in the HLTH panel discussion, which was pre-recorded. In both cases, however, Gilfillan is never identified as the first director of the Center.

In the text message, Conway also declared that the LinkedIn description with the term “inaugural director” was supplied by HLTH organizers and he had corrected his LinkedIn profile late Tuesday. [It’s not known whether he did so before or after the text message query from MedCity News.]

Unfortunately, the scapegoating of HLTH isn’t be accurate though HLTH organizers should have done a bit more due diligence.

On Wednesday, Jody Tropeano, content director, HLTH, explained that the idea for the panel came from Smith’s team at CMMI and that they suggested the two past directors be included in the panel. [Smith didn’t respond to a voicemail and text for comment but a CMS representative suggested going to HLTH officials for answers since they host the conference.]

“Our agenda clearly states this is a panel with “the current CMMI Director and his two predecessors”, at no point did HLTH refer to any panelist as the ‘inaugural’ Director,” Tropeano responded in an email.

MedCity News has worked with HLTH for the past two years to bring the ENGAGE at HLTH patient engagement track to their event and sees no reason to doubt Tropeano’s explanation except that perhaps more attention should have been provided in curating the panel. Also, while Conway’s LinkedIn post continued to include the aberrant “inaugural director” language for most of Tuesday, HLTH’s panel description was accurate in that it didn’t include that term.

Neither HLTH organizers nor the moderator, Annie Lamont, managing partnr at Oak HC/FT, which backs HLTH, appeared to be aware of Gilfillan’s pivotal role at CMMI since its establishment.

“I was asked by HLTH and CMMI to moderate the panel,” Lamont wrote in an emailed response Wednesday. “They organized it and billed it as the past three directors of CMMI.”

And indeed when the actual panel aired, Lamont fed into the very revisionist history that it was Conway, not Gilfillan, that led the startup CMMI team. Neither Smith, nor Boehler countered that narrative though Conway makes an attempt to give credit where it is due.

Right off the bat, the session that aired Wednesday begins:

Lamont: So Patrick, let’s start with you. I know how hard startups are. In fact, everybody on this panel knows how hard startups are and I can’t imagine doing one inside the federal government. You led the creation of CMMI from the beginning and served as the first permanent director. Can you walk us through that experience of setting up some of the original models?

Conway: Yes, so it certainly was a challenge — startup within government, so everything from hiring a lot of the original staff to setting up the processes within government for a startup….Very exciting time. Learned a lot ….

Neither Boehler nor Smith challenged Lamont’s initial statement of Conway being the first leader who helped to spearheaded the original models and value-based care that CMMI has come to be known for. Were they unaware of the history of such a consequential organization they led/lead?

Boehler: So I think of the startup phase. Patrick was kind of like WeWork and I was the SoftBank that came and took it over after (laughs)….

In the second round of questioning from Lamont,  Conway tries to make amends before answering the question about value-based care:

First, um, I will say that it occurred to me after I answered your question (scratches neck, eyes downward, wry smile) that Rick Gilfillan, there were some folks in the very early stages of CMMI that I worked with, so I want to credit them.

But this diminishing of Gilfillan’s role is what riles up former CMMI staffers. They believe that as the first director, he played a pivotal role in the early days of the organization and is being sidelined, in part because he is so unassuming.

“Many serve in government and follow it with a lifetime of extolling their accomplishments — that’s not Rick [Gilfillan],” texted one healthcare executive. “He’s just about making a difference and it’s sad others have not given him due credit in the story of CMMI.”

When reached by phone, Gilfillan was very forgiving about not being included on the HLTH panel reflecting on CMMI’s history and Conway’s LinkedIn post. He dictated a statement:

It’s probably just a mistake because someone didn’t know the full history. The CMMI startup team of 80-plus people were dedicated, very hardworking and teamed up with other committed CMS and HHS groups to build the first 20 or so models for testing. That team grew significantly over time, expanded the number and sophistication of the models and continued to do outstanding work under Patrick’s leadership.

A former CMMI staffer was less forgiving of Conway.

“I don’t know why he wrote that on his LinkedIn,” the person said referring to the since-amended post describing himself as the ‘inaugural director’ of CMMI. “Patrick has been through a lot and he is trying to reclaim his identity but this is just claiming much more” than is accurate.

“Been through a lot” is a reference to a bruising incident in Conway’s life that occurred when he was the CEO of BlueCross BlueShield of North Carolina. Last October, a court found Conway guilty of charges of driving while impaired and child abuse emerging from a car crash on June 22 in Archdale, North Carolina. His young daughters, both under 10, were in the car at the time of the crash. It wasn’t immediately clear whether his attorneys followed up on their promise to appeal the ruling. Conway initially found support from his employer’s board of directors but later was forced to resign. This June, Conway became CEO of Care Solutions at Optum, the UnitedHealthcare data analytics division.

“He’s got good credentials, he doesn’t have to lie about it,” charged one former CMMI staffer of Conway.

Find Out Why Food Synergy Is Important to Achieving Optimal Health

Find Out Why Food Synergy Is Important to Achieving Optimal Health

Why Am I Having Weird Dreams During Quarantine?

Counting Calories Is Basically Pointless. So Why Are We Still Doing...

ABOUT US
Strength Gate is your Health website. We provide you with the best and latest Health articles and videos from around the world in one place.
Contact us: gdomain18@gmail.com
FOLLOW US
© 2020, All Rights Reserved Design by Web Booklet